The upcoming Christian County Genealogy Society Quarterly will be featuring a couple of articles of interest with regard to historical/genealogical occurrences in Christian County in the late 1800's.  One will be an overview of the 4/29/1880 article in the Morrisonville Times with regard to the 1880 Tornado and the path of its destruction as well as an article on the much talked about Hell's Half Acre.

The following are excerpts from those articles.....


HELL’S HALF ACRE:  THE HISTORY OF THE LEGENDARY GHOST TOWN OF CHRISTIAN COUNTY.  (1855 TO 1880)
Much speculation has went around present day Christian County about the location, history of and the demise of the village of Half Acre, better known as Hell’s Half Acre.  To the present day little still exists documenting the now ghost town of Christian County. .....

Half Acre’s reputation gained its notoriety as being known as Hell’s Half Acre when criminal and unsavory types of persons took residence in and/or frequented the village, both before and after the Civil War. In the 8/21/1903 edition of the Decatur Daily Review, it was reported that during the Civil War, it was rumored to be the headquarters for a band known as the Knights of the Golden Circle and a known location to harbor deserters of the Army.  The article further mentions that an old resident travelling thru Half Acre was so impressed with the reputation of Hell’s Half Acre and all that he witnessed that he wrote an article to a Chicago newspaper about the village, but to date this writer can find no evidence of such an article.  Per an accounting in the 7/28/1927 Breeze Courier, Major Vandeveer related that the saloon, located on the widely traveled road, attracted all types of persons with the promise of liquor, women and gambling; including gamblers, robbers, killers, and deserters from both sides of the Civil War.  The village was known for the types of persons who gathered there as the unsavory persons frequenting the village would often lay in wait for passersby or ride into Taylorville causing uneasiness and fear among the travelers and residents of Taylorville with their unruly actions and shooting sprees.  “No man was safe on the roadway or dark’ stated Major Vandeveer.  Major Vandeveer’s and the witness referenced in 1903 accounting’s claims that deserters of the Civil War were known to frequent Half Acre were given credibility by my father’s finds of the Civil War uniform button.  This Civil War button could also have belonged to Edward Bradley himself as Mr. Bradley’s Civil War Draft Registration was found dated September 10, 1863, but no other documentation of his actual enlistment, or muster papers could be found, to actually place him as fighting for either side. .....

To learn more about the location, stories of the occurrences and what a genealogical search found on the owner of Half Acre, contact CCGS for a membership soon so you won't miss out on the rest of the information!!!!

Several Lives Lost and a Great Many Persons Severely Injured

Morrisonville Shares In the Loss

Saturday, April 24th, 1880, will long be remembered by the residents of Christian County as an epoch in its history, fraught with desolation, ruin and death.

On Sunday morning vague rumors were afloat, as to the awful calamity, caused by the dread cyclone’s resistless march  -- too sole verified in all its horrible reality.  On Monday, through the courtesy of Mr. Thos. Smith, a farmer living on the place of T. J. Hailey of Palmer, Ill., who, in company of others, visited the scene of the disaster, where on Saturday at 5 o’clock, all nature seemed to smile with the dawn of a revivifying period, and where home of plenty abounded; now shorn of adornment, wrecked beyond all possibility of future use.  The storm sounds to have gathered in the south-west and travelled almost a north-eastwardly direction, with but little  deviation from a direct line from whence it came until eleven miles of a beautiful farming country had been utterly stripped of building, fruit trees, fences, too, the  destruction of years of toil of many a sturdy tiller of the soil.  Leaving in its track three dead and many wounded, several of whom will probably die; besides stock of every description, strewn about, and mangled is every inconceivable manner.

The first place in the track of the storm was the home of Mr. Thomas Smith, 4 ½ miles from this place.  Summing up, happily found, no casualties of any great magnitude apparent.  Mr. Smith in his delineation, represented the storm as seen by himself, as gathering in mid air preparatory to the fall enlarged, and remaining stationary for a few seconds, then with a rush beyond preparation, swooped down, lifting the house clear off the founodation and partially turning it about, dropped it some twenty-five feet away; overturning the kitchen stove and a dish safe, the latter falling upon his little boy of three years, fortunately doing him no harm.  The outside of the house presents the appearance of having withstood a siege by a battering ram, the shingles being torn off in many places, while a great hole in the side of the home, shows plainly that a missile of some weight found a lodgehole there.  Mr. Smith says, “I tell you boys, it came with a rush; tearing my stable and smoke house into everlasting giblets  --  where they are I do not know.”

To find out more about Hell's Half Acre and if maybe one of your relatives were in the path of the 1880 tornado and the resulting damage, contact us for a membership to obtain the October Christian County Genealogical Society Quaterly!  Check us out on our FB page also!!! 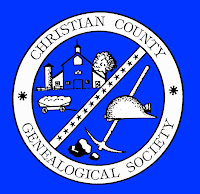